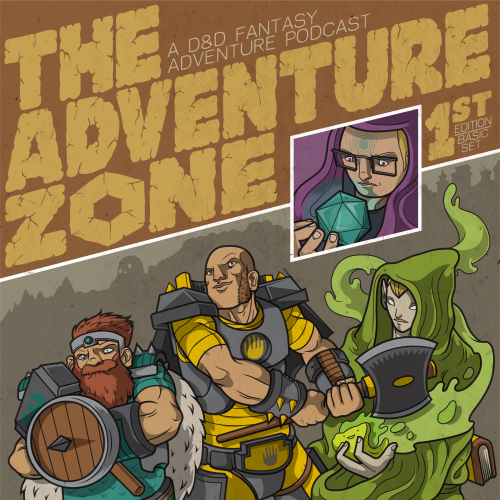 Just as a warning, I will be super spoilery throughout this challenge, so if you wanna listen to The Adventure Zone before you read this, feel free. And honestly, I encourage you to do that, anyway! But this paragraph is basically my blanket statement of WARNING: THERE BE SPOILERS AHEAD.

Anyway, there’s so much I appreciate about all of the arcs, even the non-traditional “The Stolen Century,” and I will gleefully go back and relisten to each. As of today, I have listened to every single of the sixty-nine episodes in “Balance” four times each, and I will probably do it again in the near future because the entire thing is just that damn good.

Out of all of them, though? The one I’ve continued to get more and more out of with each listen is definitely “The Eleventh Hour.” While “Petals to the Metal” had me falling in love with the McElroy men and the characters they created and “Crystal Kingdom” had me on the edge of my seat, it wasn’t until this arc that I started to realize how amazing the story was. My brain started racing when Magnus was revealed to be one of the Red Robes, and I almost promptly started a relisten to see if I’d missed any hints Griffin might have dropped. “The Eleventh Hour” completely changed everything for The Adventure Zone. It had me questioning Lucretia, the Director, and her Bureau of Balance, and even myself as a writer. How would I ever weave a story as good and engrossing as “The Eleventh Hour?”

But it wasn’t just Griffin’s glorious storytelling. The three main characters blossomed in this arc, partly brought on by Griffin forcing Travis, Justin, and Clint to address the histories of Magnus, Taako, and Merle, respectively, in what was probably one of the most emotional set of scenes up until that point. You could just tell that, by now, they had all grown so attached to their Ruff Bois that having to look back on mistakes they’d made (or just fate, really) was just as brutal as it was for the fictional people they were playing. Although Merle’s and Taako’s chance to change their pasts were heart-wrenching, the one that really got me was Magnus. And it didn’t help that this was playing in the background:

Before he did this scene, Travis even warned Griffin that he felt connected to Magnus in a way he hadn’t expected, and you can actually hear him choke up several times. Prior to the first episode of The Adventure Zone, Travis had created this very intricate backstory for Magnus that Griffin had deemed way too dark for what they were trying to do initially, and this was the first time we had ever really heard it: he had gone up against a tyrant, who then after being defeated returned and destroyed Magnus’ home, killing his wife and mentor. And in “The Eleventh Hour,” Magnus was given a chance to change that. Even though deep down I knew that Travis would decline the offer to save his wife, at first, I wasn’t sure I believed that Magnus would actually make that choice. After all, feeling the survivor’s guilt and the loss had tortured our favorite fighter. As I looked back over the course of the series, I could see how a lot of his decisions – even if they were made without conscious effort of Travis’ part – were trying to save a version of his family, to make up for what he ha last. But when Travis said, “It isn’t what Julia would have wanted,” I fucking broke down. First, it stayed true to who Magnus really was, and second, that showed me, yes, Travis really did feel that connected to his character. I could trust him to be honest. I had to stop the podcast for a few minutes to deal with the emotions that welled up inside me. Like, I get this is a D&D podcast, but dammit. Come on. There’s a reason TAZ resonates with so many people across the globe.

Of course, there are still plenty of goofs and action to keep even me satiated, and Griffin really stepped up his game, both as a DM (coming up with the plot and puzzles, for example) and composer (did you listen to that track above??). But all of that coupled with what the boys were doing with their characters? This is about as perfect as an arc can get.

Runners-Up: “Petals to the Metal” and “Crystal Kingdom”